Posted on December 6, 2014 by Admin
Feld Entertainment’s newest Disney On Ice production is a celebration of royal proportions featuring Tangled, Snow White and the Seven Dwarfs, The Princess and the Frog and Cinderella 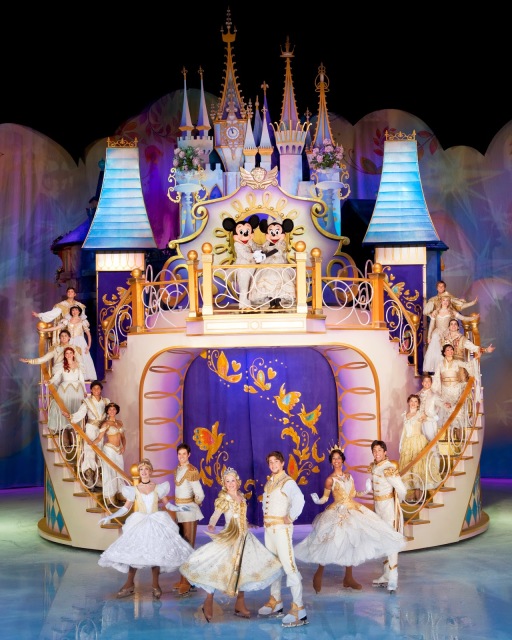 The much-awaited Disney on Ice season is back at the Smart Araneta Coliseum on December 25 to January 4!
This year, Pinoys are invited to join Mickey Mouse, Minnie Mouse, Donald and Goofy as they follow four of Disney’s most inspirational princesses on their adventures to fulfill their dreams in Feld Entertainment’s newest ice spectacular, Disney On Ice presents Dare to Dream. Combining the contemporary stories of two modern-day princesses, Rapunzel and Tiana, with the classic elegance of Cinderella and Snow White, Dare to Dream whisks audiences away on exciting journeys where dreams really do come true.
Audiences begin their magical, musical voyage in New Orleans celebrating the story of The Princess and the Frog with Princess Tiana and Prince Naveen, and then escape into the enchanted forest with Snow White and the Seven Dwarfs. The trip continues to Cinderella’s kingdom in her search for true love and follows Rapunzel as she discovers the world beyond her tower on her quest to see the floating lanterns. The Disney Princesses then come together for the first time on ice during the finale, to welcome Rapunzel into their royal court in the ultimate princess experience.
“There’s something within each of the stories of Tangled, The Princess and the Frog, Cinderella, and Snow White and the Seven Dwarfs that speaks to women and girls and families around the world,” says Producer Nicole Feld. “Each of these princesses is searching for what truly makes them happy. And I think that’s very reflective of what audiences are like today.”
“This show is different from anything we’ve ever done, and we’re excitedabout all the exhilarating aspects we’ve included in this production,” says Producer Juliette Feld. “This is the first time Rapunzel is featured on the ice with her tremendous amount of hair. And new this year, the Princess who started it all, Snow White, will be joining the show with the Seven Dwarfs, bringing more magic than ever before.”
Disney’s Tangled
In adapting Tangled to the ice for the first time, Director Patty Vincent was challenged with how to convey all of Rapunzel’s hair without interfering with the skating. During the segment, 2,000 feet of silk representing Rapunzel’s magical, golden tresses winds throughout the rafters of the arena and drapes down to the ice for use in a heart-stopping aerial act never before seen in a Disney On Iceproduction. Rapunzel and Flynn Rider escape the tower, flying 25 feet up in the air and performing daring acrobatics. 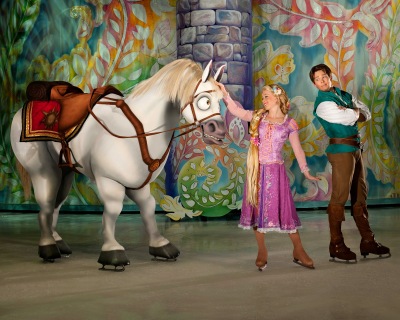 “The performers trained for six weeks just to build their upper body strength, because skaters use very different muscles when ice skating,” says Vincent. “It works perfectly on the ice because they don’t have to run; they just skate, and they’re lifted into the air and begin a gorgeous athletic act.”
Under the direction of Choreographer Cindy Stuart and Aerial Trainer Anna Kaminnik, the performers mastered the blend of ice and aerial choreography in which Rapunzel and Flynn fly above the arena floor and slowly descend to the ice in a fluid motion, creating a feeling of constant movement.
Stuart was able to contrast the beauty of the aerial act by showcasing the athleticism of the skaters when Rapunzel and Flynnstop at the Snuggly Duckling tavernon their way to see the lanterns.During this energetic sequence, the pub thugs break into a rowdy show tune medley, and the scene turns into a trick section with performers doing cartwheels, handstands, jumps and leaps on the ice and the props.
The adventurous nature of Rapunzel’s story allowed Costume Designer Ivan Ingermann to incorporate unusual fabrics and silhouettes into his costumes. Rapunzel’s world is mainly full of rich colors and textures and romantic silhouettes.However, during the Snuggly Duckling segment, Ingermann designed costumes for the pub thugs using faux fur and faux leather, materials not normally seen in an ice show.
Another distinctive design element ofDare to Dream is the revolving set, an idea conceived by Scenic Designer Stan Meyer. By designing a rotating piecethat transforms to specifically fit each of the unique settings of the stories, Meyer was able to create one major centerpiece with four entirely different environments. When the set morphs into Rapunzel’s forest, a paneled backdrop of pastel flora and butterflies opens and a majestic tower slowly emerges, rising from the ice as golden hair falls from the window.
Lighting Designer Peter Morse incorporated these same pastels and royal colors by surrounding the audience in rich shades of purple, a prominent color in Rapunzel’s world. When Rapunzel and Flynn Rider finally reach the end of their journey, the entire arena goes dark as a single lantern slowly floats up into the air, and suddenly, lanterns illuminate the sky above the audience.
“When we create Disney On Ice, what we’re hoping to do, aside from bringing families together and telling great stories, is create memorable moments,” says Producer Kenneth Feld. “In the Tangledsequence, there is one moment that is absolutely unforgettable. At every show, one special child is picked to launch the first lantern. All you see is the one lantern that goes up, and as soon as it reaches the top, all the other lanterns light up the arena. It’s breathtaking.”
Walt Disney’s Snow White and the Seven Dwarfs
In contrast to the colorful and playful world of Rapunzel, to set the mood for the story of Snow White, the lighting had to take on a darker and more mysterious quality. As the story begins, the lighting dims and a thin layer of fog fills the ice. Soon a flash of light and dark shadows appear signaling the arrival of the Evil Queen.
When it comes time for Snow White to flee into the magical forest for protection from the Queen, Morse focused on the use of black lights to highlight her frantic pace. As she finallyescapes the forest and arrives at the door of the Dwarf’s cottage, the ice is bathed in rich golden colors, signaling the calm after the storm and her newfound safety. 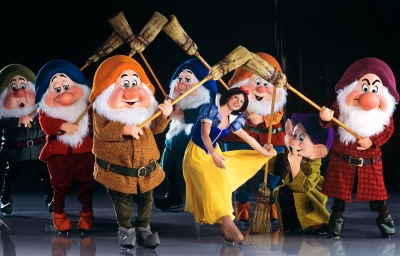 Being the Princess who started it all, the costume design for Snow White is a classic silhouette that will be easily recognizable by audiences young and old. The traditional yellow and blue dress was made for swift, yet graceful, movement on the ice, twirling and flowing as Snow Whiteglides through her world.
Audiences will also be delighted to see all Seven Dwarfs make an appearance in Dare to Dream, each outfit as uniqueas the Dwarf wearing it.
Walt Disney’s Cinderella
As the story shifts to the romantic tale of Cinderella, a glittering purple and blue castle stands majestically in the background with a white and gold grand butterfly staircase framing the clock tower. Cinderella is joined by ball attendants regally dressed in bright, colorful gowns sparkling with the help of sequins and glitter. Below the castle, glisteningstars and swirls of soft blues and pinks fill the ice when Cinderella skates to classic songs such as “So This is Love” and “A Dream is a Wish Your Heart Makes.” 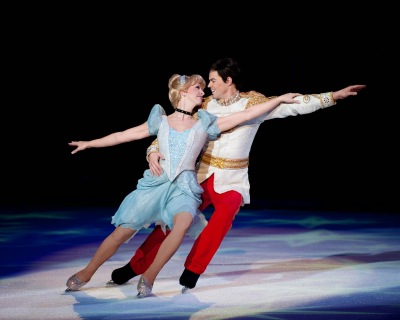 In addition to the pair skating and elegant ice dancing showcased in Dare to Dream, Cinderella features synchronized skatingby a team of 20 performers portraying the palace guards searching for the owner of the glass slipper. More than half the cast performs this fast-paced and complex precision number, creating lines, formations and constantly moving patterns on the ice.
Light-heartedelements throughout the segment provide a contrast from the romanticism and precision of many of the scenes. Cinderella’s mice friends make an appearance singing and dancing while they make her a dressfor the ball. Cinderella’s stepsisters are on hand as well,amusing the audience with their comical antics.
Lighting plays an important role in telling Cinderella’s story, and a key component of the lighting design is the ability to feature the skaters themselves. “We have to light the whole scene to keep it bright and beautiful,” says Morse, “while also highlighting the characters.”
With a swish of her magic wand, a flash of light and those three little words, the Fairy Godmother transforms Cinderella beforethe ball. From a cloud of smoke, a sparkling carriage emerges, drawn by four white horses and glistening like a crystal ball in the darkness, creating a magical moment as Cinderella rides toward the castle. Later, as Prince Charming and the Duke ponder the identity of the beautiful girl from the ball, the ice is dark, save for the moonlight streaming through tall windows on either side of the ice and forming a dark hallway between them, an illusion created by gobos and spotlights.

Disney’s The Princess and the Frog
Popular color palettes and designs from the Harlem Renaissance became a major source of inspiration for The Princess and the Frog. When Dare to Dream opens in New Orleans, vibrant orange and golden yellow light fills the arena, matching the bright colors of the costumes inspired by the period. Set against a French Quarter backdrop painted in rich reds, purples and greens, flappers and banjo players revel on a balcony while page boys and other townsfolk dance on the ice below, creating a multilayered street party.The opening number, “When the Saints go Marching In,” combines jazz-influenced choreography and the Charleston to create a vivid and energetic street scene.

Disney On Ice presents Dare to Dream seamlessly merges the classic with the new, maintaining the timelessness of some of the most cherished stories of all time, Cinderella and Snow White and the Seven Dwarfs, while also incorporating popular songs and unforgettable scenes from Disney’s newest fairytales, Tangled and The Princess and the Frog. From the lighting and scenery to the music, choreography and costumes, each element of Disney On Ice presents Dare to Dream magically combines to create a memorable show for the entire family.
To purchase tickets, visit www.ticketnet.com.ph or call 911 55 55 for inquiries.