“There will be a 360-coverage as only the Kapatid Network can deliver,” TV5 President and CEO Noel Lorenzana said at the launch held at Marriott Grand Ballroom as he raised the curtains on “Bilang Pilipino 2016,” the official handle of the network’s election coverage.

“In partnership with PLDT, Smart, Cignal, Philippine Star, Business World, Radyo Singko, InterAksyon.com, and Bloomberg Philippines, Bilang Pilipino will deliver news, information, opinion, and insights about the elections wherever and however Filipinos consume content. BIlang Pilipino will be on TV, radio, cable, your phones, computers, tablets, and – thanks to Philippine Star and BusinessWorld, even on newspapers. It will engage with everyone over social media.

News5 Head Luchi Cruz Valdes promised “the fastest, deepest, and most credible election coverage” leveraging not only off the multi-platform distribution capacities of the PLDT Group of which TV5 is a member, but also off strategic partnership forged with government, civil society, the academe, and the private sector. 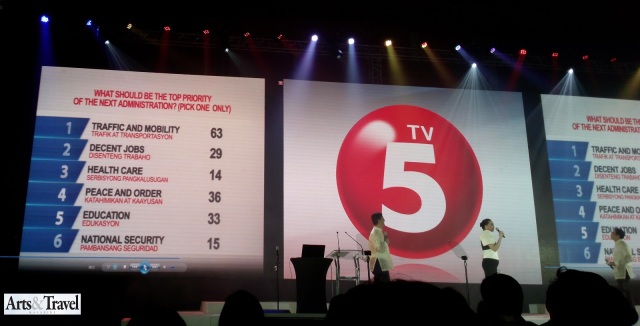 – “First, it speaks to our content: It will be heavy not just with facts, but with numbers. ‘Bilang’ commits us to data-driven content so we can assure our audience of reliable information and insights.
– Second, “Bilang Pilipino’ speaks to our mission: in an election, every vote, every voter, every Filipino counts.
– Finally, “Bilang Pilipino’ is a call to action. In English, it literally also means ‘As Filipinos…’ Thus, Bilang Pilipino, as Filipinos, we are all called to be responsible, to take these elections seriously, to think beyond the elections for the betterment of our nation. ‘Bilang Pilipino’ carries this promise: We will deliver not only as professional journalists, but as proud citizens of a hopeful Philippines.”

Lorenzana said TV5 will have seamless content partnership with Philippine Star, the country’s leading broadsheet daily, BusinessWorld, the Philippines’ leading business newspaper, Radyo Singko, the No. 1 all-news FM station, InterAksyon.com, which, given its phenomenal growth was recently announced to be spun off from TV5 as a standalone digital news platform, and Bloomberg Philippines, instantly a game-changer in business news coverage in the cable industry dominated by Cignal TV. “This wide and deep partnership for content will be amplified by the unparalleled reach afforded by our technology and platform partners,” he said.

“Beyond the broadcast audience of TV5 and Radyo Singko, we will reach more than 75M PLDT, Smart, Sun and TnT subscribers, more than 11.2 million combined fans and followers on Facebook and Twitter, the millions of registered mobile users empowered over Voyager’s free-data Safezone community.”