Filipinos in Europe Get Ready for ASAP 20 Live in London

“ASAP20 in London” is set to be as stellar with its line-up of more than 40 of the most respected recording artists, the most awarded performers and the most exciting showbiz personalities from the Philippines.

It was in April this year when new ABS-CBN Managing Director of Europe, Middle East and Africa (EMEA) Kai V. Rodriguez announced that for the first time ever, ABS-CBN The Filipino Channel (TFC) in Europe would unfold a four-pillar event series as a tribute to and in celebration of Galing ng Filipino (Greatness of the Filipino) in the region.
The series of TFC summer events kicked off with TFC Summer Caravan 2015 held in various cities and countries, followed by the the launch of TFC  theMovies in theaters and the two-day 31st Barrio Fiesta sa London. Throughout June and July, the TFC EMEA team left a trail of merry festivities that acknowledged Filipino heritage, culture and achievements in the new societies that they live in.
“We’ve come a long way and our last pillar event this year celebrates that in grandiose fashion,” said Rodriguez. “The history of the journey of Filipinos in Europe will mark the day when thousands of our heroic Filipino nurses, caregivers, nannies, hotel and restaurant workers, entertainers and other professionals congregate on September 6, 2015 to take part in a showcase of world-class Filipino talent via the Philippines’ longest-running, top-rating live musical variety show, ASAP 20 Live in London, at the British historic venue of The SSE Arena Wembley.”

The SSE Arena Wembley, erstwhile called the Empire Pool when it was built for the 1934 British Empire Games before it adopted its current name in 2014, has played host to musical legends like The Beatles, The Rolling Stones, Pink Floyd, The Who, ABBA, U2, The Cure, George Michael, Elton John, Barbra Streisand, Diana Ross, Madonna, Britney Spears and Beyonce. This indoor arena sits beside the Wembley Stadium, which is the largest stadium in United Kingdom and the second largest in Europe. The SSE Arena Wembley is the country’s second largest indoor arena. 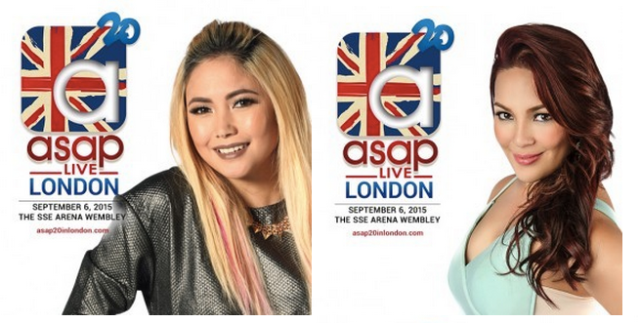 A venue and event of such prominence deserve no less than a top-notch celebrity roster. Confirmed to be part of ASAP 20 Live in Londonare: Aiza Seguerra, Alex Gonzaga, Angeline Quinto, Arci Munoz, Ariel Rivera, Bamboo, Coco Martin, Dawn Zulueta, Enchong Dee, Enrique Gil, Erik Santos, Gary Valenciano, Jake Cuenca, James Reid, Janella Salvador, Jed Madela, Jessy Mendiola, John Prats, Julia Barretto, KC Concepcion, KZ Tandingan, Lani Misalucha, Liza Soberano, Luis Manzano, Maja Salvador, Martin Nievera, Nadine Lustre, Paulo Avelino, Piolo Pascual, Rayver Cruz, Richard Gomez, Richard Poon, Robi Domingo, Sam Milby, Shaina Magdayao, Vina Morales, Xian Lim, Yeng Constantino, Zsa Zsa Padilla plus more surprise celebrities and guests!
“Our huge and impactful event journey this year in Europe has drawn thousands of Filipinos together to represent with pride, joy and confidence. With our September 6 show, TFC joins ASAP as it takes its 20th anniversary celebration to a level that rivals the best that the global entertainment industry has to offer. This says without apologies that we Filipinos have arrived in Europe, what we are and offer are world-class, and that we have the numbers, the skills and the power to make a difference in European society,”Rodriguez said. “We believe in ourselves, we are proud of our ‘galing’ and we will let it shine wherever we are.”
For more information on ASAP 20 Live in London and how to purchase tickets, visit http://www.asap20inlondon.com