Posted on July 11, 2015 by Admin
Justine Joy is Filipino-Australian-based independent artist. Her independently produced debut album “Fly Away” is a testament of her fun and carefree spirit that soars high with her intense passion for music.

Justine Joy spent her childhood years honing her talent in singing by taking a vocal coach, joining singing talent competition, and performing in numerous school plays. In 2006, she was spotted by a dance talent scout and persuaded her to be part of the newly formed hip hop dance crew “Gigabeatz” and went on to dance and sing with them until 2008. Gigabeatz won and placed in the top spots in several local hip hop dance competitions such as “Looze Control” and “Groove Hills”, as well as performed at many local charity and nightclub events.

In 2007, Justine was fortunate enough to dance with Gigabeatz as the front act to the acclaimed group “The Outlawz” created by the late legendary rapper Tupac Shakur on his 10th Anniversary Legacy Tour, at their Sydney show with local artists Lia Maja and Abel. Also in 2007, Justine and Gigabeatz placed 1st in the local song and dance competition “Boogie Tunez” (Justine & Gigabeatz – Boogie Tunez 2007), the first of its kind in the area. There she was approached by Australian artist Neska after winning and was congratulated and encouraged that she has so much potential in her performance skills and to keep working at it to make her performance art the best it could be. This led to a number of live shows for Justine in some of Sydney’s acclaimed nightclubs during that year and in early 2008. Furthermore in 2007, during the “19th Philippine Fiesta Kultura” Justine and Gigabeatz were the backup dancers for Toni Gonzaga and Sam Milby’s live performances.
In March of 2008, however, Justine Joy took on a new career as a flight attendant in a prestigious international airline company. During this time she had to go on a hiatus from Gigabeatz and her performing as she was travelling the globe and her unpredictable schedule would not allow her to make it to regular rehearsals. 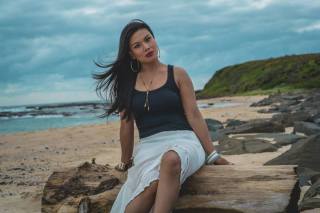 Around 2010, after a 2 year break, Justine felt it was time to start performing again, even if just for private family functions, as she missed performing and the stage so much.
Her wish came true starting again in 2010, when she was asked to dance as an extra in local Australian-Spanglish rapper “D-Minus’” music Video “Set it Off” (D-MINUS – SET IT OFF OFFICIAL MUSIC VIDEO), and then again in 2012 for D-Minus’ clip “La Rumba”. When 2013 came around, her passion grew ever larger when she performed on stage again in the “25th Philippine Fiesta Kultura.”
Justine Joy, songwriter, is now setting sights on fulfilling her dream of conquering the global stage with her true passion: music. In between her ‘day job’ and travels, she hits the studio to write and record tracks for her album.
And finally, the moment has come to pass. With her formidable spirit, boundless energy, and impassioned showmanship, Justine Joy is raring and ready to fly away.
She is now in the Philippines to promote her carrier single “Tonight” which she also wrote included in her debut album entitled “Fly Away.”
Now available in all Odyssey Music Stores.
For news updates on Justine Joy, visit her Facebook and   YouTube.