Last June 11, one of the best show I’ve seen this year was the lighting and video mapping show of the Aguinaldo Shrine, Kawit, Cavite.

As part of the 117th Philippine Independence celebration, the Department of Tourism (DOT) and the Local Government of Kawit, Cavite have partnered for the monumental lighting and video mapping show of the iconic Aguinaldo Shrine in Kawit, Cavite, in order to raise the standard of monument lighting and presentation of buildings.

The 18th century national monument will be seen in a completely new light, through an audio-visual staging that makes use of video mapping technology. Also known as “projection mapping” or “spatial augmented reality,” video mapping uses digitally-produced images based on the architectural lines of a structure to tell a story, create an impression, and bring any structure to life.
The public viewing of the lighting and video mapping show begins on June 11 and will be on a special limited run until June 15. The shows are scheduled to take place every 7:30 PM, 8:30 PM, and 9:30 PM. In between the video mapping show, guests can also view the permanent lighting with sounds of the historical structure. 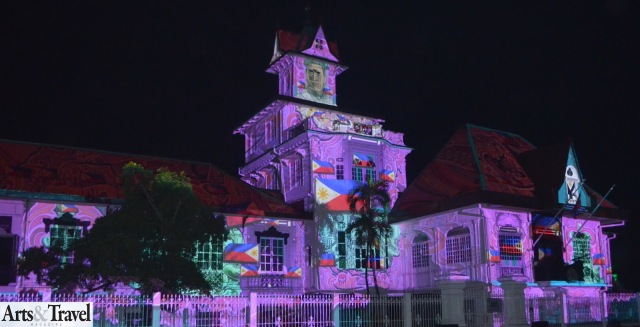 “The lighting and video mapping show of the Aguinaldo Shrine is the first time that it will be displayed on a national heritage site in our country. A state-of-the-art, avant-garde show of our history, it will tell the story of who we are as a people in a single, fluid, audio-visual narrative,” DOT Region IV-A Director Rebecca V. Labit.
On June 15, a formal ceremony will be held as the final public viewing and last day of this Independence Day feature, and will be attended by government officials, tourism stakeholders, members of the academe, members of the diplomatic corps, historians and heritage experts, media representatives, and influential personalities.
“More than a hundred years ago, the Aguinaldo Shrine was a witness to one of the most crucial junctures in Philippine history—the declaration of a free Filipino nation. Being an important edifice of our national identity, it is a living reminder of the freedom that our ancestors have fought and longed for, and the monument of the successes that our country has achieved since then. It is our honor to lead this Independence Day celebration using a new technology such as video mapping to relive and re-imagine the beginning of our country’s independence,” DOT Secretary Ramon R. Jimenez, Jr. said.
The 14,000-square foot heritage mansion was the ancestral residence of the Aguinaldos and the birthplace of Emilio, who later became General and the first Philippine President. The residence was declared a National Heritage Shrine shortly after the death of Emilio Aguinaldo in 1964.

Constructed in 1845 from wood and thatch materials, the Aguinaldo Shrine has seen various reconstructions in 1849 and during the early 1920s. Its most historic spot, known as the “Independence Balcony,” saw the end of the three hundred-year Spanish colonial rule in the Philippines and the birth of the First Philippine Republic.

In recent years, there has been a growing interest in the country’s heritage structures and destinations, with more tourists including historical churches, ancestral houses, shrines, and monuments in their travel itineraries. Through this Independence Day initiative, the DOT aims to further enhance the touristic experience and make the country’s heritage destinations more fun for both foreign and domestic tourists.
“Through this project, our foreign and domestic tourists will have a deeper understanding for the many heritage destinations around the country. It is our hope to encourage the private sector and other stakeholders to work together in conserving both our tangible and intangible cultural heritage for the next generation of Filipinos to see and appreciate. Our achievements today are rooted and founded on our past. And our history and national heritage are integral to the continuity of our national identity,” Secretary Jimenez added.
The lighting and video mapping of the Aguinaldo Shrine is a project of the DOT through the initiative of the LGU of Kawit, Cavite and implemented by the Tourism Infrastructure and Enterprise Zone Authority (TIEZA) and OptimumShow Philippines, Inc. The project is also supported by the National Historical Commission of the Philippines (NHCP).
Visit itsmorefuninthephilippines.com
www.facebook.com/istmorefuninthephilippines
www.instagram.com/TourismPHL
www.twitter.com/TourismPHL