7-Eleven kicks off expansion into Mindanao

Posted on May 11, 2015 by Admin
Davaoeños can now enjoy 24/7 convenience of 7-Eleven everyday!
Philippine Seven Corporation (PSC), the country’s largest convenience store chain operator, launched its business expansion in Mindanao on May 8, 2015 with the grand opening of its first 7-Eleven store in “The Land of Promise.” 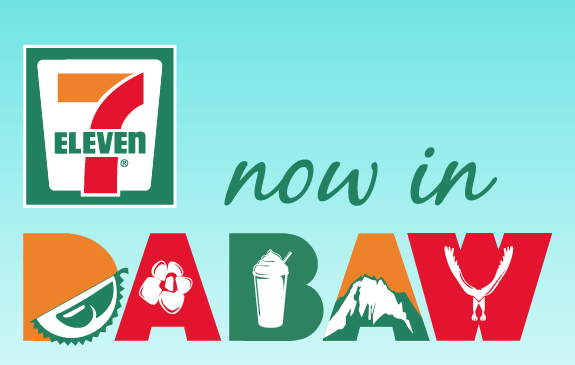 As part of 7-Eleven’s strategy to maintain market share, the company continues to protect and expand its leadership by continuing to grow its store expansion rate. Aside from securing its foothold in Luzon and Visayas, PSC aims to capture a new market in Mindanao.
“We’re excited to be in Mindanao, especially since it’s a very attractive market and we look forward to seeing its potential, which is why we’re committed to jumping in with both feet,” said Jose Victor Paterno, PSC President and CEO.

Located within Abreeza Mall in Davao is the first of the 50 targeted 7-Eleven stores to be opened in the cities of Davao and Cagayan de Oro this year.

7-Eleven aims to open 30 stores in Davao and 20 in Cagayan de Oro respectively by year-end. And by June, PSC will have 4 other operational stores to be followed by 12 more sites by September in both Davao City and Cagayan de Oro.

Following 7-Eleven’s Mindanao opening on May 8, will be a series of store openings at Ulas Crossing in Davao and George Town Cybermall and Limketkai Center in Cagayan de Oro. PSC targets to open 120 stores in Mindanao in the next 3 years.
7-Eleven aims to lead the convenience store industry in Mindanao, beginning in the two cities that have been experiencing an increase in tourist arrivals and per capita income in the past few years.
Among the other potential key cities PSC is eyeing for future expansion include General Santos, Bukidnon, and Iligan.
Expanding into Mindanao also marks a vision realized for the late PSC Founding Chairman, Vicente T. Paterno – for 7-Eleven to go national. With Mindanao having been close to his heart, the first store in Mindanao is being dedicated in his honor.
Mr. Paterno was an ardent advocate for Mindanao’s development and worked tirelessly to further its growth. He had been named “Adopted Son of Mindanao” for prioritizing policy supporting Mindanao’s development over his two decades in government.