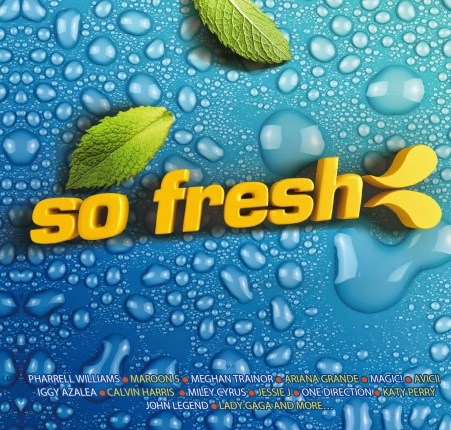 Sony Music Entertainment and Universal Music joined forces to cook up the year’s freshest hits compilation release so aptly entitled So Fresh, The Best of 2014, clamping up 20 big-shot songs including Billboard Hot 100 #1s such as Miley Cyrus, Meghan Trainor, John Legend, Pharrell Williams and MAGIC! Now it couldn’t get any fresher than that!
Running for more than 70 minutes, the CD packs in 20 speaker juices including new-world hotness anthem “All About That Bass” from 2014 breakthrough artist Meghan Trainor, as well as girl-power collaborations “Problem” by Ariana Grande feat. Iggy Azalea, “Black Widow” by Iggy Azalea feat. Rita Ora, and the Jessie J- Ariana Grande-Nicki Minaj airwave buster “Bang Bang”. Numbering in more of the dance floor hits, it also features tracks from DJs Calvin Harris with “Summer” and Avicii with EDM-country crossover “Hey Brother”, plus certified dance tracks “Wild Wild Love” (Pitbull feat. G.R.L.), “Do What U Want” (Lady Gaga feat. R. Kelly) and “This Is How We Do” (Katy Perry).
Male musers won’t get disappointed as bands like MAGIC! reel in household staple “Rude” and Maroon 5 with “Maps”. Pop prince Justin Timberlake is also featured with “Not A Bad Thing”, and newcomer Sam Smith with “I’m Not The Only One” from his first album that came out this year. Boybands are also in line as “Story Of My Life” by One Direction and “She Looks So Perfect” by 5 Seconds of Summer are counted on the track list.
So Fresh throws down every now and then too with slow tunes spread all throughout: the overtly heated “Wrecking Ball” by Miley Cyrus, the comeback classic of John Legend “All of Me”, and Begin Again movie theme “Lost Stars” by Maroon 5 frontman Adam Levine.
Instant classics such as “Happy (from Despicable Me 2)” by Pharrell Williams and “Love Never Felt So Good”, a posthumous virtual duet by pop legend Michael Jackson with Justin Timberlake, raise the bar for other concurrent various artist releases.
By and large, the bravado of So Fresh is in its qualitative AND quantitative collection. This 20-track assembly is massive enough to stir up anticipation on what could be a really, really good year ahead in music…and what could be a very, very good compilation franchise.
The complete and sequential tracklist of So Fresh:
1. Meghan Trainor – “All About That Bass” (Clean Version)
2. Maroon 5 – “Maps”
3. Pharrell Williams – “Happy (from Despicable Me 2)”
4. Ariana Grande feat. Iggy Azalea – “Problem”
5. MAGIC! – “Rude”
6. Jessie J feat. Ariana Grande & Nicki Minaj – “Bang Bang”
7. Calvin Harris – “Summer”
8. Avicii – “Hey Brother”
9. Pitbull feat. G.R.L. – “Wild Wild Love”
10. Iggy Azalea feat. Rita Ora – “Black Widow” (Clean Edit)
11. Miley Cyrus – “Wrecking Ball” (Clean Version)
12. Sam Smith – “I’m Not The Only One” (Radio Edit)
13. Justin Timberlake – “Not A Bad Thing” (Clean Version)
14. Katy Perry – “This Is How We Do”
15. Michael Jackson feat. Justin Timberlake – “Love Never Felt So Good”
16. Lady Gaga feat. R Kelly – “Do What U Want” (Edited)
17. One Direction – “Story of My Life”
18. 5 Seconds of Summer – “She Looks So Perfect”
19. John Legend – “All Of Me”
20. Adam Levine – “Lost Stars” (Album Version)
So Fresh is available in major record stores nationwide starting last December 2014, under Ivory Music & Video. Get two bonus tracks when you get it on digital!
Additional tracks “Turn Down For That” by DJ Snake & Lil Jon and “Love Runs Out” by One Republic come with downloads of the album off iTunes.

Visit IVORY Music & Video’s Facebook page athttp://www.facebook.com/ivorymusicandvideophilippines for the latest news and updates on your favorite local and international artists!