Shane Filan for You and Me Tour Live in Manila

Posted on August 26, 2014 by Admin
Shane Filan, returns to Manila for a major concert!
One of the lead vocalists of super group and worldwide phenomenon Westlife, Shane Filan fulfills a promise he made to Filipino fans last year, as he holds his much-awaited solo concert on October 1, 2014 at the World Trade Center Manila. 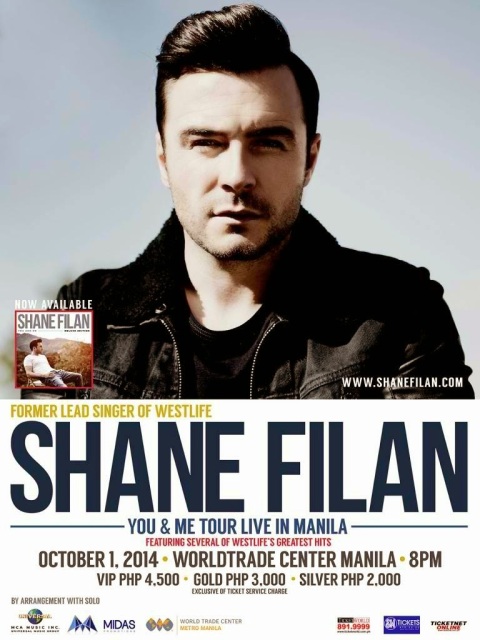 Shane’s first ever major show in Manila after the Irish group’s fond farewell tour back in 2011 and is part of his ongoing You & Me World Tour to promote his debut album.
His new album is way more than ballads that Westlife and has been described as a “progression from Westlife’s sound.. the end result is a collection of adult contemporary songs that mix a variety of musical styles.”
The record is dominated by up-tempo and mid-tempo songs, a reflection of his own record collection, mixing pop, soul, country and even a hint of traditional Irish music. With this first solo album, Shane emerges as a pop writer to be reckoned with. Shane chooses the very first song he wrote, the catchy Everything To Me, to be his first single.
Born July 5, 1979, Shane Steven Filan grew up in Sligo, a busy commercial town in the northwest of Ireland. The youngest of seven children, he has three brothers and three sisters: Finbarr, Peter Jr, Yvonne, Liam, Denise and Mairead. His parents owned a diner in Sligo named Carlton Café located on Castle Street and Shane used to work there as a waiter from a very early age.
Shane found his passion in music at a young age. Together with school mates Kian Egan, Mark Feehily, and later joined by Nicky Byrne and Brian McFadden the group would eventually create Westlife. Their eponymous first album was released in 1999 and shot the band to fame.
Ten albums and over 50 million sales later, the band came to an amicable split with a wonderful, sell-out farewell tour in 2012 after which Shane decided to embark on a solo career. His first solo album You & Me was released in November 2013 under MCA MUSIC.
Shane Filan’s first solo gig in Manila, featuring several of Westlife’s greatest hits, is definitely not to be missed! Presented by Midas Promotions, Shane Filan You & Me Tour Live in Manila 2014 is held on 1 October 2014 at the World Trade Center Manila. Tickets to the show are on sale through SM Tickets (www.smtickets.com; tel: 470-2222), Ticketnet (www.ticketnet.com.ph; tel: 911-5555), and TicketWorld (www.ticketworld.com.ph; tel:891-9999) from 16 June 2014.
Watch the Shane Filan You & Me Tour Live in Manila 2014
Date: Wednesday, 1 October 2014
Time: 8pm
Venue: World Trade Center Manila
Tickets: PHP 4,500 (Platinum Seated), PHP 3,000 (Gold Standing), PHP 2,000 (Silver Standing)
Tickets are now available through SM Tickets, Ticketnet, and TicketWorld outlets.
Our ticketing partners apply a customer service fee to all tickets purchased via its network. This fee is additional to the face value of the ticket and is payable upon purchase of tickets.
Visit Shane Filan official website: http://shanefilan.com/
For more updates, visit these Websites:
https://www.facebook.com/MidasPromotionsPhilippines
https://twitter.com/MidasPPH
www.midaspromotions.com
https://www.facebook.com/midaspromotions
https://twitter.com/midaspromotions
https://www.youtube.com/user/SWMidasP
http://instagram.com/midaspromotions

simple person living life to the fullest!
View all posts by Admin →
This entry was posted in Uncategorized. Bookmark the permalink.