Posted on September 17, 2013 by Admin
Pinoy Big Brother ex-housemate Tin Patrimonio is going to be launched in a film as one of the first Filipino woman to lead a revolt against Spanish colonizers, Maria Josefa Gabriela Silang or well known as  ‘Gabriela Silang.’

The biopic of Philippines’ figure of woman empowerment as evident in the name of the leftist party Gabriela directed by former actor Carlo Maceda and written by Frank Rivera.
“Gabriela” centers on the historical figure and her husband, Diego Silang, in leading the Ilocanos against Spanish rule in 1763. 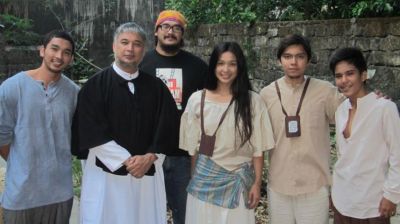 A film on the historical revolt led by Gabriela Silang will premiere on Thursday in time for the 250th anniversary of the Philippine heroine.
After her husband’s death, Gabriela takes over his role in rallying their community to recapture their home from the Spaniards.

Portraying the heroine in the OnCAM Productions offering is former “Pinoy Big Brother” housemate Tin Patrimonio, with Carlo Aquino as Diego Silang.
Joining them in the cast are Ricky Davao, child actors BJ Forbes and Justin Pinon, Rob Sy, Jeffrey Santos, Iris Lapid, Arthur Solinap, Lars Svanberg, Nene Tamayo, Yen Abuid Paderanga, Rex Roco, Archie Adamos, Bon Vibar, Johnron Tanada, Cris Michelena and Eric Perez.
“Gabriela” will hold its premiere at the AFP headquarters in Camp Aguinaldo, Quezon City on September 19 — a day before the actual death anniversary of the heroine.
The production company led by Sonia Roco said no commercial release is planned for “Gabriela.”
Noting the film is nonetheless available for special screenings, Maceda said, “We hope that through films like these, we can better impart the message of heroism and inspire the youth to be better and good leaders in the future.”