José Rizal (June 19 1861 – December 30 1896) was a Filipino nationalist, doctor, reformist, writer,  political figure,  prolific poet, essayist, and novelist, artist who dabbled in painting, sketching, sculpting and woodcarving. and polymath whose works and martyred death made him a hero of the Philippine Revolution.He was known as a nationalist and the most prominent advocate for reform in the Philippines during the Spanish colonial era. Because of his beliefs and the changes he fought forHe is considered  the national hero of the Philippines. 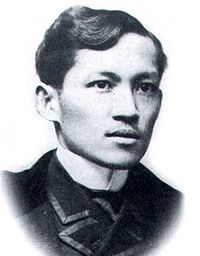 The life Rizal lived is a more abiding gift than the things he said and wrote. His life will forever be of inestimable importance. – Frank Laubach, in his book Rizal: Man and Martyr (1936)

Here are some of the readings about his leters.

-We want the happiness of the Philippines, but we want to obtain it through noble and just means. If I have to commit villainy to make her happy, I would refuse to do so, because I am sure that what is built on sand sooner or later would tumble down.  (Letter to Blumentritt, (31 January 1887))

-One only dies once, and if one does not die well, a good opportunity is lost and will not present itself again. (Letter to Mariano Ponce, (1890))

– To live is to be among men, and to be among men is to struggle, a struggle not only with them but with oneself; with their passions, but also with one’s own. (Letter to his family, Dapitan (c. 1884))

– In the Middle Ages, everything bad was the work of the devil, everything good, the work of God. Today, the French see everything in reverse and blame the Germans for it. (Letter to Fr. Pastells (11 November 1892))

-The Philippines should be grateful to you if you would write a complete history of our country from an impartial point of view.. But don’t expect thanks and laurels–crowns of flowers and laurels are the inventions of free people. But perhaps your children may gather the fruit of what the father planted. (Letter to Blumentritt (13 April 1887))

– To doubt God is to doubt one’s own conscience, and in consequence it would be to doubt everything. (Letter to Fr. Pastells (4 April 1893))

– No, let us not make God in our image, poor inhabitants that we are of a distant planet lost in infinite space. However brilliant and sublime our intelligence may be, it is scarcely more than a small spark which shines and in an instant is extinguished, and it alone can give us no idea of that blaze, that conflagration, that ocean of light. (Letter to Fr. Pastells (4 April 1893))

– I believe in revelation, but not in revelation which each religion claims to possess… but in the living revelation which surrounds us on every side — mighty, eternal, unceasing, incorruptible, clear, distinct, universal as is the being from whom it proceeds, in that revelation which speaks to us and penetrates us from the moment we are born until we die. (Letter to Fr. Pastells (4 April 1893))

– Each one writes history according to his convenience. ( Letter to Blumentritt, written at Leipzig,(22 August 1886))

“Rizal, Hidalgo, Pardo de Tavera, and Luna constantly encouraged each other in their individual pursuits — and also enjoyed the camaraderie and fellowship of each other.” — In Excelsis”  Ibid. pp. 86-87

Rizal’s friends in Paris, Barcelona, Madrid, London, Hong Kong, and Germany have become infected with his faith. They, like him, are writing to the utmost of their ability, pinning their faith upon education’ they call it “propaganda”, though it is not what we ordinarily mean by that word in English. It is propaganda for the truth. “Take care,” says Rizal to them, “not to insert exaggerations or lies, nor to imitate those who make use of dishonest means and of low and unworthy language to gain their ends. . . We must teach our enemies that, speaking morally and humanely, we are better than they are. We can win our cause by speaking the truth, because right and justice are on our side.”

simple person living life to the fullest!
View all posts by Admin →
This entry was posted in Arts and tagged Hero, History. Bookmark the permalink.